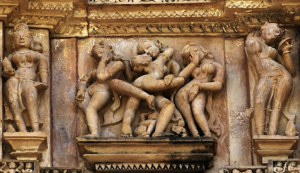 I’m such a geek when it comes to new research in human sexuality and I’m grateful that my friends all know this about me.

When I started getting multiple links from them to an article about semen on the Scientific American Mind website, the sex geek in me had to investigate.

Is human semen an evolved substance?

Research by scientists Gordon Gallup and Rebecca Burch shows that semen has some pretty incredible traits.

Taoist sexual practitioners have stated for centuries that semen has beautifying and rejuvenating qualities when ingested through oral sex. Perhaps they were on to something that only now is being proven by science.

There are tons of very interesting things in the article, but what really caught my attention was the research showing that semen may be linked to lifting your mood.

Studies were done with women who ingested semen vaginally. They did not use condoms.

It is important to note that the vagina is a place where things are absorbed rapidly into a woman’s circulatory system because it is surrounded by a large network of arteries and blood vessels.

And Gallup and Burch found over 50 different compounds in human semen such as prolactin (an antidepressant), oxytocin (the love hormone), melatonin (relaxant) and even serotonin (another antidepressant).

After finding all of these natural mood-altering chemicals in semen, Gallup and Burch joined forces with Steven Platek, a psychologist at the University of Liverpool.

They studied the moods of women who had unprotected sex versus women who used condoms. Through surveys, they found a link between happiness and the absorption of semen.

Seems the Taoists were right, semen is a “good for you” substance.

The author of this wonderful article does point out that although semen may have mood enhancing properties, this shouldn’t be a reason to practice unprotected sex.

While semen may be good for you, semen with a disease or an infection isn’t.

For those of you who are bonded by body fluids with your partner, this may incentise you to swallow (or not), it might just put a smile on your face!